Khun Pan large Khun Phaen puzzle a great challenge to free the Khun Phaen from captivity ... Move the big flat stone to the position of the four small stones and then through the slot into freedom. A very tricky task, because at least 100 moves are required in a start variant. Further, demanding, but also light, game variants ensure a lasting fun. We show this on our site under Solutions Khun Pan .... 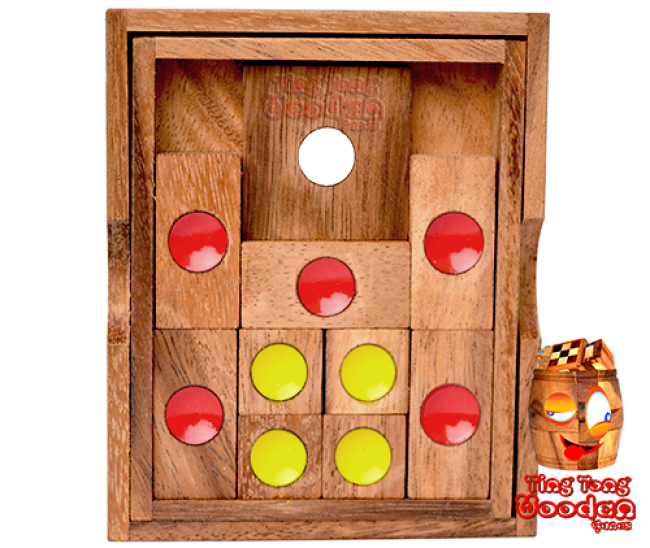 There are different starting positions for the Khun Pan which can be bought here in a nice wooden version, this is one of them:

The goal, at the Khun Pan, is to move the big piece, here with the red dot, from the starting position only by moving it down to the middle.

The game task may seem simple, but once you've played with it, you're getting a little tricky and difficult this puzzle really is. The well-known Khun Pan variant shown here requires 100 moves, some other game variants still 79 or 35 moves. According to the legend, this game reflects the escape of the Khun Pan from captivity, which has been beautifully implemented as a game idea in this Khun Pan wooden game. The red checker is a bit flatter than the other tokens, so he can, if you have found the way, be pushed through the slot in the middle of the game from the field. The khun pan attains freedom.

Fancy the hardest adventure .... so try it out.

Here a solution variant for the one start position with 100 steps in 16 pictures represented:

The whole 100 steps and more starting possibilities for you to try out yourself can be found here: Khun Pan solution