Hexadomino or Hexamino a hexagon Domino wooden board game with 63 tiles that have 6 corners ... For all game lovers this is a luxury set to complete your play area! Invigorate the art of table games with this fascinating interpretation of traditional dominoes. In the game of Hexadomino are simple and progressive ways to spend hours having fun with players of all ages to win. This beautiful, handmade set will be delivered in a Samanea wooden box ..... 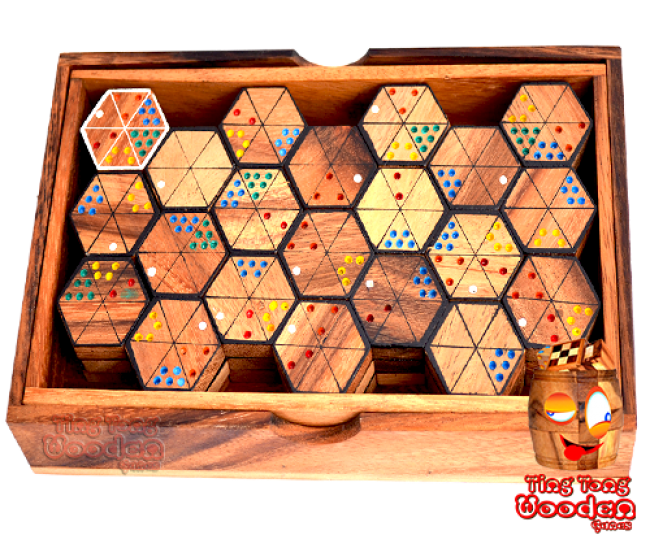 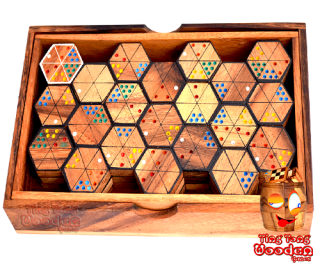 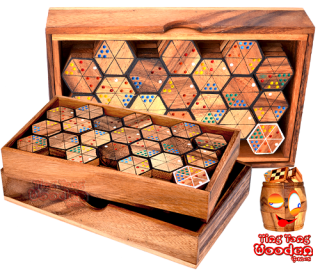 Hexadomino 63 hexagonal pieces to play Domino.
These are divided into six equal triangular fields, and depending on which piece, are marked with one to five points or blanks.
The set of pieces consists of:
1 starting piece with six scoring–fields
62 main pieces with scoring- and blank-fields (6 pieces has only one scoring-field and five blank-filed and are called end pieces)

Preparation
The starting piece is put into the center. The other pieces are mixed face down. Each player pulls 7 pieces, the remainders pieces  forming a pack.
The players uncover their pieces so they cannot be seen by the other player(s).

This game can be paled in several ways:

Subject of the game:

To be the first to lay all his pieces, or to have the lowest number of pieces in one's own pack at the end of the game.

The players lay down one piece in turns, this piece is renewed from the pack which is eventually used up. Pieces can only be laid with fields joining up with fields of the same score, blank fields may border only on blank fields. If a player does not have a playable piece, a new one is taken from the pack. If this cannot be played then a further piece is taken. If this again cannot be played then the player misses his turn and it is the next player turn.

The end of the game:

This is when all pieces have been laid or if none of players can make a legal move.

The player with the lowest number of points on his remaining
pieces is the winner after each player's points have been totaled up.