Cribbage is one of the best two-handed games - and one of the longest games released this year. Cribbage an exciting game of cards and dice made of Samanea wood for 2 persons. Two to four people can play, individually or as a team. But Cribbage is basically played best by 2 or 4 people, and the rules that follow are for this number of 2 or 4 players ....
Cribbage for 4 players (also like 8 players possible) is a game for 4 teams or 4 players who play each one individually. The board is made of wood with a card game of 52 cards in a collapsible wooden box made of monkey pod wood in Thailand ... 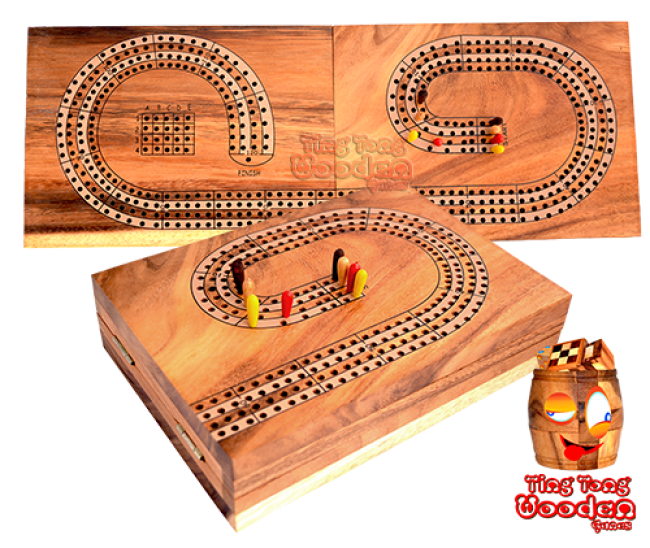 Cribbage wooden board for 4 players or 4 teams with 8 players as a wooden board Variant for folding with playing cards Thailand wooden games
Sales price 640,00 ฿
Ask a question about this product 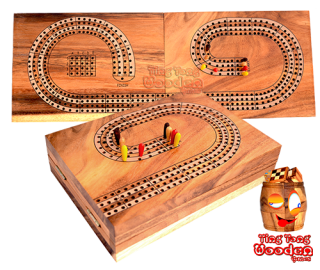 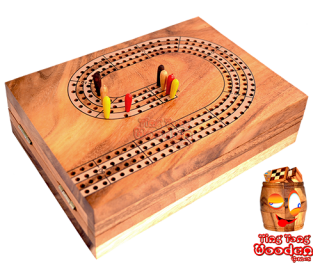 Cribbage game for till 4 game teams

Two or three people can play. Or four people can play two against two as partners. But Cribbage is basically best played by two people, and the rules that follow are for that number.

The playing cards and rank of the cards

The drawing, shuffle and cut

From a mixed deck, each player draws one card and leaves at least four cards at each end of the deck. If both players cut cards of the same rank, everyone draws again. The player with the lower card performs the first hand. Thereafter, the turn to the deal between the two players, except that the loser of the game covers first, when another game is played. The dealer has the right to shuffle last, and he presents the cards to the non-dealer for the cut before the deal. (In some games there is no cut at this time.)
The dealer spreads six cards face down to his opponent and himself, starting with the opponent.

Goal of the game

The goal is to be the first player to score 121 points. (Some games have 61 points.) Players receive points during the game and for various card combinations.
Each player looks at his six cards and "covers" two of them face down to reduce the hand to four. The four folded cards form "the crib". The crib belongs to the dealer, but these cards are not suspended or used until the hands have been played.

After the cot has been deposited, the non-dealer cuts off the package. The dealer reveals the top card of the bottom pack and places it face up on the pack. This card is the "starter". If the starter is a Jack, his name is "His Heels" and the dealer bets 2 points at once. The starter will not be used in the game phase of Cribbage, but will later be used for various card combinations that score points.